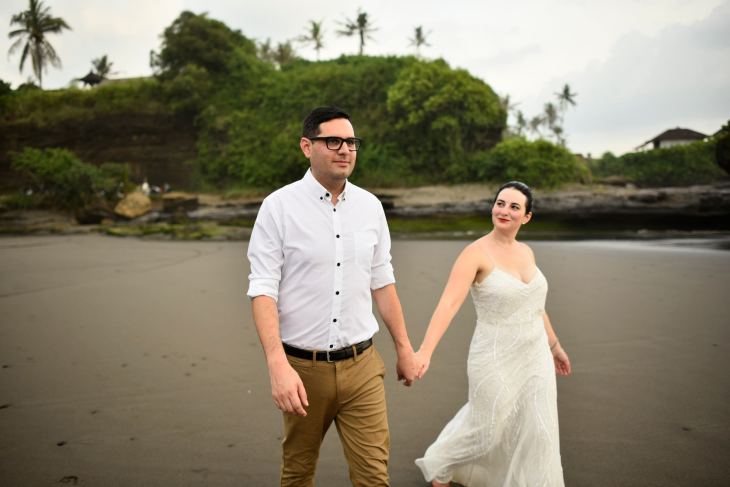 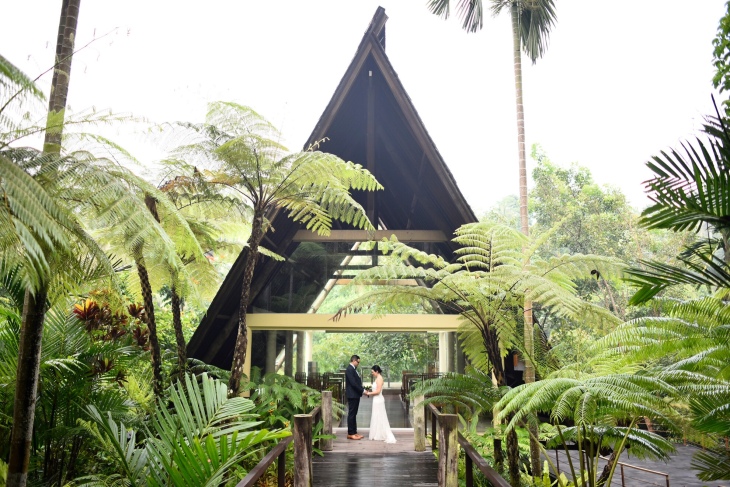 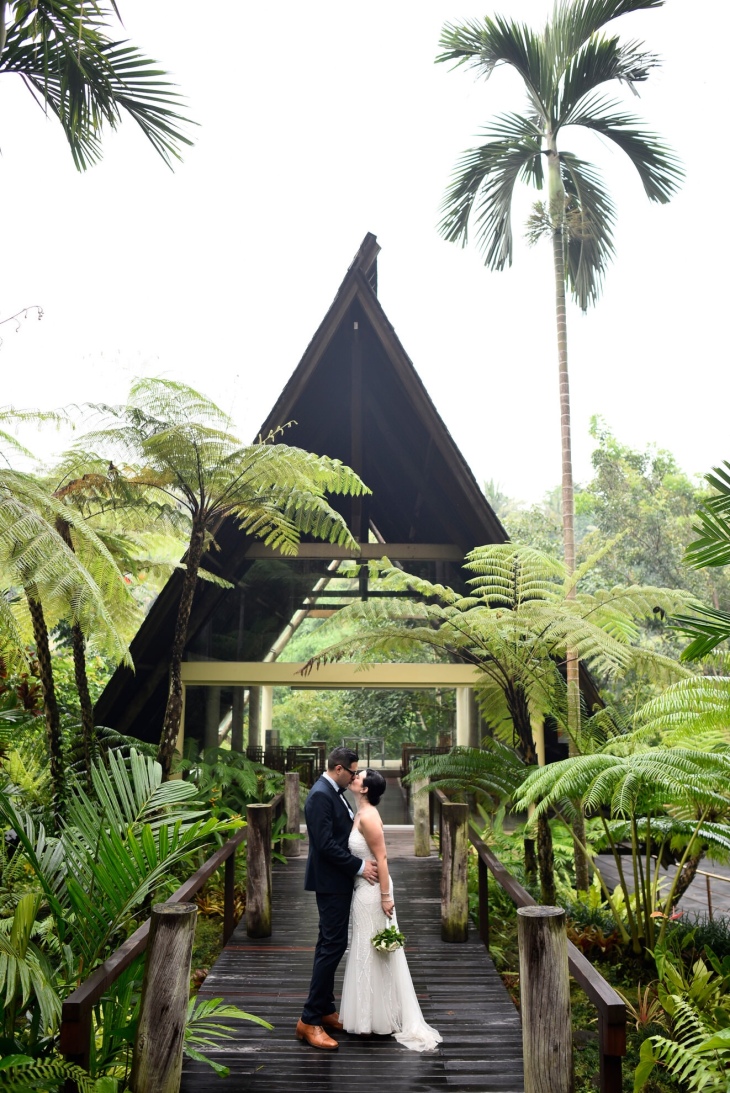 All Photos by Budy Pratama for Terralogical except the selfie

One of the most common questions I get from people who find out I’m married is, “How did you and your husband meet?” We’re coming up on our 8 year anniversary of being together, and I wanted to tell the story of how we came to be The Lunas. I’d love to hear your “how I met my significant other” story in the comments.

From the time I was a little girl, I always loved romance stories. Not the “Cinderella, over-the-top” kind of love, but more like “let’s grow old together” love stories.

I’d been through a fair share of shitty boyfriends; men that didn’t respect me and wanted to change me, men that abused me both physically and emotionally, men that preferred my body to my mind, men that didn’t really want to spend time with me but rather call/instant message (this was before texting) when they wanted something from me.

On a warm August afternoon, he walked into Instructional Design class and into my life.

Gustavo (Gus, for short) and I met in college. We both got our Bachelor of Arts degrees in Mass Communication Design at California State University, Chico, which is located an hour and a half north of Sacramento, known for being home to Sierra Nevada Brewery, Lulus.com, and Aaron Rodgers.

On the first day of my junior year of college, I was sitting in an Instructional Design class, chatting with my two favorite classmates and confidants. I always sat against the wall in classrooms, for extra back stability and so I could see the door.

Class was about to the start.

The lights had already been turned off.

The projector was on.

Then door opened, and there he was.

He was backlit, glowing like a beacon in a dingy windowless classroom from the hallway’s florescent lights. Handsome, kinda rough around the edges, with dark, curly hair.

So, after class, I went to find him. My IRL mission came up short, but I had other means of investigating.

Our first assignment was to teach each other about ourselves: write a brief introduction of who we are on the class message board and comment on several people’s threads.

I opened every single thread hoping to find this mysterious man. Once I’d read each post, if it sounded remotely interesting, I’d cross-reference Facebook. I was feeling frustrated after going through 3 John’s who liked football and beer. I closed my laptop and forgot about it for the night.

The next morning, I noticed there was one more entry from around 2am.

The thread read something like: “I’m Gus. I have a pug and I love espresso. I’m into photography. I’m moving to Seattle at the end of this semester.”

My heart was beating fast. My palms were sweating, and not just because it was like 100 degrees in Chico’s late-August summer.

I responded to his thread with some ridiculous message about liking coffee and loving Seattle (in hindsight, he obviously didn’t care that I had visited Seattle twice but whatever it was relevant).

I went back to Facebook and hovered over the “Add Friend” button for a while. I closed my eyes and clicked.

A day later, he accepted.

That day, I Facebook messaged him and introduced myself. We chatted for a little while, and then that turned into chatting every day, then several times a day.

Eventually, I thought he might want my number to text me. This was before I had an iPhone and before Facebook messenger on mobile was a thing. I was running late for class and quickly typed my number with a quick “text me!” before slapping my laptop shut.

But he never texted.

We had three classes together that semester,  but we never talked in class. In Adobe Flash (RIP) class, we would sit at adjacent desks so we could see each other, but didn’t talk. In Documentary Film, there was one seat between us. In Media Marketing, he sat two seats behind me in another row. I remember turning around to look at him in class and feeling mortified to speak to him, the blood rushing to my head and my heart.

I even told my sister about him. I’d never talked to her about guys before. I talked to my friends in class about how handsome I thought he was. I had never been like that before, but some force outside of my being was drawing me to him.

I tried to keep my distance. I didn’t want a boyfriend. I was focusing on graduating college in 3.5 years and I was almost done. He told me he was about to move to Seattle.

A few weeks went by, and still no text. But when I signed onto Facebook, he would message me immediately. I figured he wasn’t into me or had a girlfriend or maybe he was into guys or maybe his phone was broken.

He kept messaging me to ask me questions about school. At the time, I was taking 18 units, which is about the equivalent of 7 courses. I was constantly running to class or working on group projects or staying late in the library. One afternoon, after he kept messaging me about projects that he “didn’t take notes about,” I finally gave him my number again.

He texted immediately. I had given him the wrong number the first time.

All day texts, during class, after class, in the evening, late into the night. He would always respond quickly.

At one point, he even texted me, “wanna get married? after I date a few crazy girls, and you date a few more psychos, of course?” I was walking to class on a particularly cold February morning, and reading those first three words filled my body with a warmth I’d never known.

During spring break of his final semester, he went on a road trip down the California coast with a girl friend (“not a girlfriend,” he assured me). He spent the entire time texting me until late at night.

That same spring break, I was visiting my parent’s house in Santa Cruz, which is known for surfing and Verve Coffee Roasters. At 11am one morning, while my mom and I were doing yoga in my parent’s sun-drenched Capitola home,  I got a text from him asking if I wanted to have coffee in an hour. I thought he was joking at first, and responded, “Yeah,” as I finished my final downward dog.  The next response,”great, I’ll see you in 35 minutes at the Verve in Capitola.” Covered in sweat from planking, I ran up stairs to find the cutest dress I fit in my overnight duffle bag and as much makeup would stay on my face between beads of sweat. “This isn’t a date,” I kept telling myself.

We found a table outside and I was shaking with nervousness. Whenever we tell this story now, he recalls my anxiousness as foresight into my personality: “kind of a mess, but super cute”.

Hundreds of texts, several late evening study sessions at the library, an afternoon stroll in the park, and one bicycle accident later, he finally asked me out to dinner right before he was planning on moving home (an hour south of Chico) for a month before relocating to Seattle. We sat outside at a local Japanese restaurant, enjoying the mid-May breeze between bites of nigiri and heart palpitations.

It felt different than it had ever felt with anyone. For the first time in my life, I felt calm with a man. At ease.

We never talked about how we felt about each other and didn’t really flirt in the way I had always flirted with men before… but spending time together felt so effortless and easy.

He didn’t kiss me that night.

I can’t explain it, but it was like… I knew that if I kissed him, it was going to be something big.

We stayed up late that night texting. He said he regretted not kissing me. My heart jumped into my throat.

The next day, standing in the kitchen of my craftsman style house in Chico, it felt like an explosion happened in my chest as we kissed. Is that what it feels like to fall in love for the first time?

The next few days, we spent every second together between finals. On his last day in Chico, he asked me to come over so he could “show me his espresso machine,” which was not an innuendo like I thought it was.

A few days later, he moved an hour away. I thought I wouldn’t see him again after that, but something strange happened.

He drove up to Chico several nights out of the week to see me and take me out to dinner. I was scared of my heart being broken but I also didn’t really care because I just wanted to hang out with him more.

A month later, he packed up a U-Haul and started driving to Seattle. He stopped at my house before my 8am work day started for one last kiss. At the time, I thought it might be our last kiss forever.

Except we never stopped talking.

When you’re falling in love and learning how a relationship works, being far away from each other feels like cruel and unusual punishment.

We kept texting and talking on the phone, sometimes Skype. We planned visits every six weeks but at the longest it was nearly two months without seeing each other.

There were many days we didn’t talk. Many nights he went to sleep before I even got home from class. I don’t remember being upset about not speaking, but I do remember feeling like there was a hole in the middle of my chest. I was living my life and he was living his—but we didn’t want to give up on each other.

Luckily, we had developed a strong friendship from all the time we spent texting before we realized we liked each other, which made it easier to trust and respect each other. 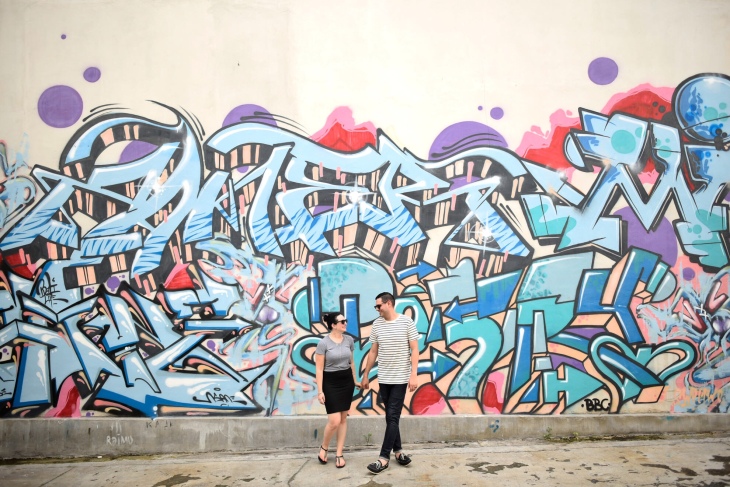 Six months later, when I graduated college, he asked me to come up to Seattle to spend time with him. I never left. 🖤🖤🖤🖤

How did you meet your significant other?